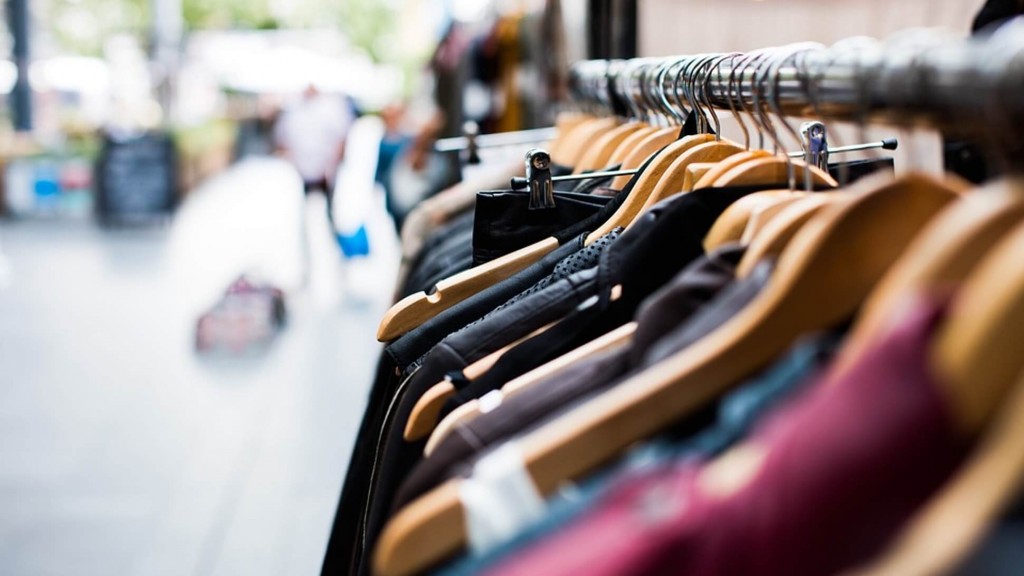 Money is a feminist issue — and yet, women are still reluctant to talk about it. According to a recent Bustle survey of more than 1,000 Millennial women, more than 50 percent of people said they never discuss personal finances with friends, even though 28 percent reported feeling stressed out about money every single day. Bustle’s Get Money series gets real about what Millennial women are doing with their money, and why — because managing your finances should feel empowering, not intimidating.

Every so often, when a celebrity enters rehab for something not normally regarded as addictive, the media gets into an argument over definitions: can behaviors that don’t involve altered states of consciousness truly be described as addictions? Or are we simply using public awareness of drug and alcohol dependence to condemn certain behaviors — or garner sympathy?

Into that category falls the problem of shopping addiction, a dependence which is aided by no chemicals or potions whatsoever (unless a stray spritz of department store perfume counts). Yet various psychologists argue that for some people, shopping ranks up there alongside booze and hard drugs as a serious addiction that can wreak real havoc on lives and credit ratings. And, somewhat surprisingly, they look to be correct.

The idea of compulsive shopping as a problem actually dates to the very beginnings of the 20th century, where two separate theorists identified it and called it oniomania, or excessive buying. One of them, Eugen Bleuler, wrote in 1924:

“The particular element is impulsiveness; they cannot help it, which sometimes even expresses itself in the fact that not withstanding a good school intelligence, the patients are absolutely incapable to think differently and to conceive the senseless consequences of their act, and the possibilities of not doing it. They do not even feel the impulse, but they act out their nature like the caterpillar which devours the leaf”.
Modern science, however, has given us more of an understanding of how the psychology of shopping addiction works, what spurs it, and how it may be cured. Bustle talked to addiction expert Dr. Carder Stout about the realities of shopping addiction and how it works.

Can Shopping Really Be A Disorder?

The argument over whether or not compulsive shopping can be defined as an addictive behavior is part of a wider definitional concern over what we do and do not classify as addiction. In the past, “addiction” was confined purely to physical substances that could foster the neurobiological aspects of addiction: an enhancement of the dopamine reward system in the brain. Our brains, it seems, have reward “pathways” that give us pleasure in response to certain experiences, and addictive substances can hijack them, particularly because they often mimic or enhance different aspects of the pathways to make them more intense.

The big difference between drugs and behavioral addictions, as they’re known, is that the latter don’t have a physical substance to create a “high” in our brains. But there’s evidence that, despite this, they can make our reward pathways go haywire anyway.

“New knowledge,” Constance Holden wrote in Science in 2001, “suggests that, as far as the brain is concerned, a reward’s a reward, regardless of whether it comes from a chemical or an experience. And where there’s a reward — as in gambling, eating, sex, or shopping — there’s the risk of getting trapped in a compulsion.” If the brain doesn’t discriminate between the kinds of high it’s experiencing, it stands to reason that the ensuing addiction issues won’t discriminate either.

“Addiction is something that touches most of our lives at some point,” Dr. Stout told Bustle, “whether it is an obsession with food, an inability to put our cell phone down, an appetite for substances or rush we feel when we swipe a credit card. The energy is the same in all these cases. Its addictive energy flows through the mind and body in a swirl of dopamine and endorphins.”

To classify your shopping behavior as an addiction, though, you can’t just be a little bit unhappy with how you sometimes get carried away on eBay; it has to be “maladaptive,” comprising the same psychological mechanisms and difficulties as more “traditional” addictions to cocaine or alcohol, for instance. A 2013 series of interviews with shopping addicts identified many aspects that are common to all addictions: use of the high to fill a sense of emptiness, denial of the extent of the issue, serious financial and social repercussions, impulsive searching for a new high, and feeling completely out of control and unable to stop.

It’s now received its own classification test, known as the Bergen Shopping Addiction Scale. The test takes on seven different aspects of addiction behavior (salience, mood modification, conflict, tolerance, withdrawal, relapse, and problems) and gives them several questions each, so that people in the test are asked to rate the truth of statements like “I think about shopping/buying things all the time,” “I shop/buy so much that it negatively affects my daily obligations,” “I shop/buy so much that it has impaired my well-being,” and “I have decided to shop/buy less, but have not been able to do so.” 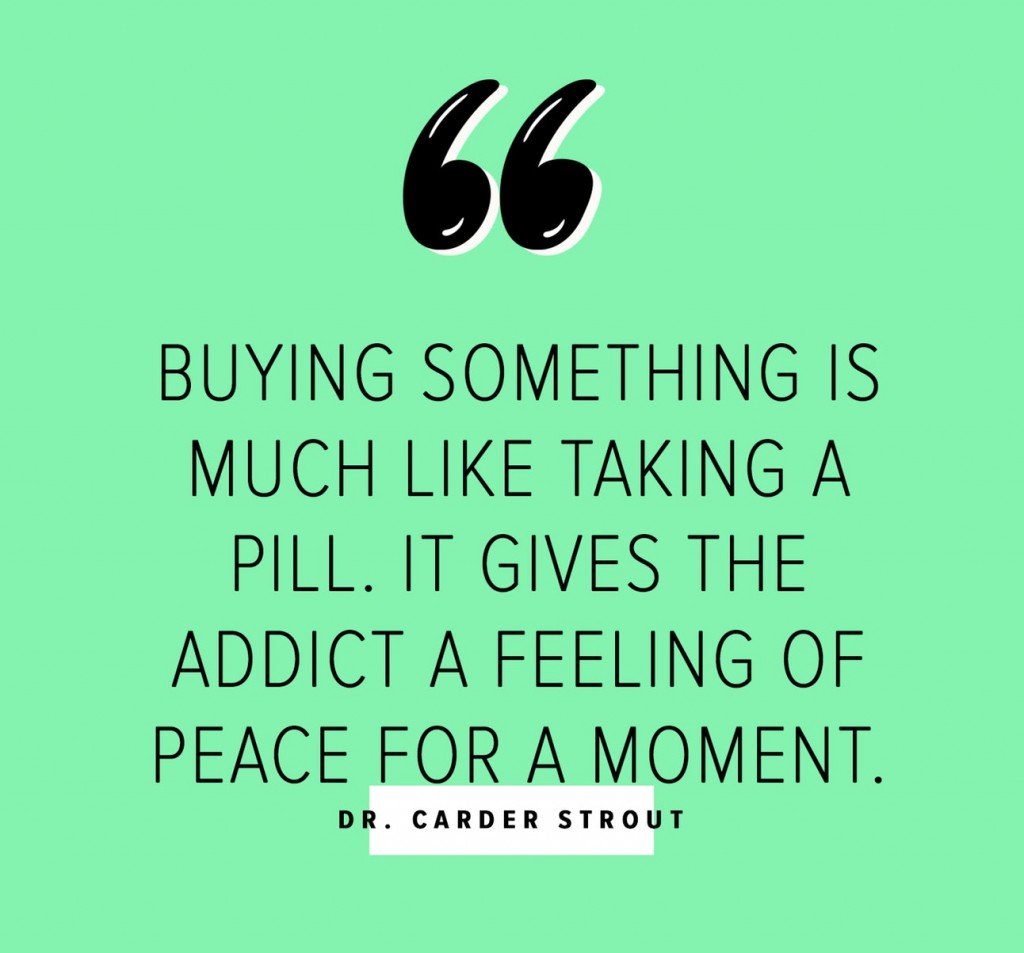 How Does Shopping Addiction Work?

The working definition of addicted shopping, according to a 2013 study in the Journal Of Groups In Addiction & Recovery, has “three cardinal features: irresistible impulses to shop, loss of control over those impulses, and the persistence of such behavior in the face of adverse consequences.” However, therapist Donna Boundy theorizes in I Shop, Therefore I Am that there are five different subtypes of addictive shopping behavior: compulsive types, image types, bargain types, codependent types, and ‘bulimic’ types. Compulsive types are the ones we may conceive of as most typically “addictive…They seek to shop to get a high and distract from problematic emotions and feelings.

There is also one particular aspect that’s peculiar to compulsive buying, and aligns it more with hoarding and obsessive-compulsive behaviors than with traditional other addictions: the action is the core issue, not the result. In other words, people buy for the sake of buying, not for the thing they get at the end. This type, according to a 2010 review of the issue in the American Journal Of Drug & Alcohol Abuse, “focuses on the buying process itself, rather than the items bought. In this instance, the purchased items are usually never used, but tend to be hidden or thrown away.”

“When someone is spending money shopping in a compulsive manner,” Dr. Stout said, “it is really no different than an alcoholic who yearns for another drink at the bar. Usually there is some emotional discomfort they are trying to smother through self-medication. Buying something is much like taking a pill. It gives the addict a feeling of peace for a moment. Usually this is followed by a cycle of guilt and shame.”

Image spenders, by contrast, are addicted to the high of elevated status and feeling superior. Bargain types gain their high from “outsmarting” others by getting a great deal, even if they have no use for the resulting item. Codependent ones are seeking to use shopping as a means to bind themselves to others, using gift-giving and lavish generosity as relationship monitors and controls, while ‘bulimic spenders’ are some of the most unusual types: they buy purely to get rid of their money, seeking a kind of security in being utterly broke.

This isn’t the only classification system, though. A famous 1988 study of “pathological consumers” identified four types instead: the compulsive ones, the “emotionally reactive” ones (who do place some sort of symbolic value on the product being bought), the impulsive ones, and the fanatics who must buy one particular product repeatedly and in bulk. It’s clear that there’s still some discussion to be had about categories in shopping addiction and how and why they work.

When it comes to treatment, these particular divisions may have genuine consequences, because each type may require different kinds of treatment. Selective serotonin reuptake inhibitors, for instance, may work for compulsive types, as a seminal 2010 theoretical framework on shopping addictions suggested:

“Research on brain activity and intervention has pointed to a link with serotonin and compulsive behavior. An amino acid based neurotransmitter, serotonin helps relay impulses between neurons in the brain. Low levels of serotonin have been associated with several impulse control disorders, and treatment with medications to enhance serotonin levels has appeared to alleviate these disorders in many patients.”

Impulse control is, however, only part of the psychological element of behavioral addictions. Even drug and substance addictions are treated with a variety of therapeutic approaches, and behavioral ones have to be approached with a lot of similar psychological care. There’s no magic bullet for figuring it out yet, though a small study of six shopping addicts (many studies are bound to be small, as the addiction is quite rare) in 2011 found that teaching addicts mindfulness seemed to help with addiction treatment. For the moment, though, shopping addiction science is, like a lot of addiction studies in general, open to a lot of new ideas. And, Dr. Stout said, it’s a genuine problem: “Shopping addiction breaks families apart and people lose their whole lives. It needs to be treated with love and understanding.”